Mystery Solved! This Is How The Pyramids Of Egypt Were Built 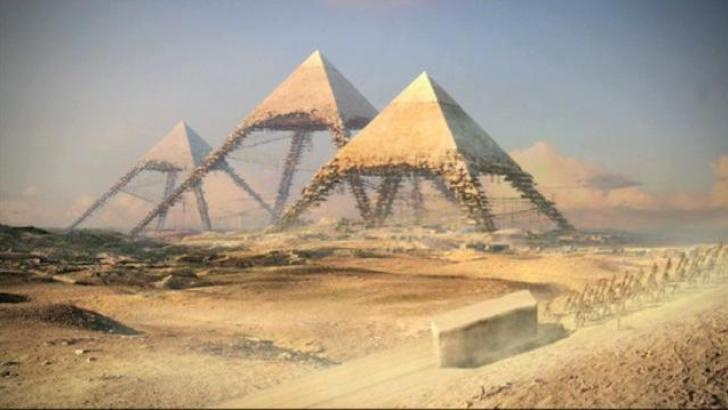 The Pyramids at the Giza plateau in ancient Egypt are considered by many to be the most incredible ancient structures ever created on the face of the earth. The Great Pyramid of Giza, although built thousands of years ago, continues to astound specialists who cannot seem to understand how it was managed by ancient man to construct such a creation without modern-day tools that make building structures much easier.

Some of the seemingly infinite amazing aspects of the Great Pyramid of Giza include:

How did the workers manage to build such a flawless structure? What was their reasoning behind making such big pyramids? How did people thousands of years ago possibly manage to transport, raise and place massive blocks of stone that weigh over 50 tons?

As reported by the most established adaptations, the Pyramids were built by colossal armies of builders. Greek Philosopher and historian Herodotus was the first in history to mention this theory. He claimed that the Pyramids at Giza were manufactured by leagues of 100,000 men, which varied month-to-month, for a period of 20 years. However, for this to be factual, it would mean that one block of stone had to be perfectly placed into position every 3 ½ minutes, 24 hours a day.

One of the greatest misconceptions that have inevitably led to numerous misinterpretations about Ancient Egyptian society, their culture, and origins, is the idea that of mummy findings inside the Pyramid. Not a single mummy has been found by experts inside the Pyramid. It is a proven fact that The Great Pyramid of Giza does not hold a Pharaoh’s mummy, and nothing uncovered inside the Pyramid suggests that there ever was one.

The weight of the pyramid is predicted at 5,955,000 tons. Multiplied by 10^8 gives a plausible prediction of the earth’s mass.

As of today, not one single expert has been able to answer three of the most fundamental questions surrounding the Pyramids at Giza which are: Who constructed them, why were they constructed, and maybe how they were constructed?

Nonetheless, a documentary on YouTube may shed light on how these amazing creations were assembled thousands of years ago. The documentary talks about the processes used to construct the Pyramids. How could materials such as wooden rollers and mud bricks take the pressure put on them by tons of stone?

Thousands of men allegedly dragged the building blocks across the desert in the excruciating heat – how did the ancient project managers keep spirits up amongst the dust-covered and exhausted workers?