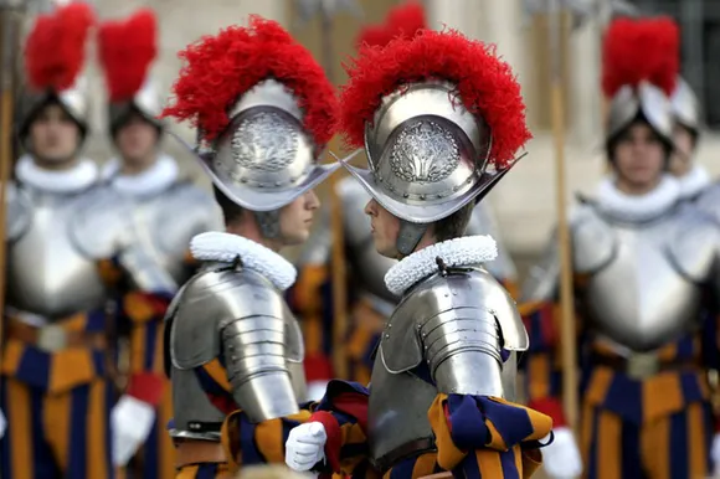 The Swiss Guard is known for its colorful Renaissance-style gala uniforms. It is the oldest military corps in the world. The members have to get vaccinated because they are close to the Pope, but not all accepted the mandatory vaccination policy issued by the Vatican.

Three guardsmen now voluntarily left the corps, the Italian newspaper “Il Messaggero” reports. The Swiss Guard are subject to stricter coronavirus regulations than other employees and visitors in the Vatican.

Three members of the guard did not comply with the compulsory vaccination request and left the corps voluntarily. Three others have been temporarily suspended from duty until they are fully vaccinated.

Lieutenant Urs Breitenmoser, the spokesman for the Papal Swiss Guard, considers the guards’ vaccination requirements to be appropriate: “This measure corresponds to those of other armed forces in the world.”

The guardsmen are subject to stricter health regulations than other employees and visitors of the Vatican. The general rule, which has been in force since October 1, “only” provides for access to the Vatican to present the “Green Passport,” which certifies a double vaccination, a recovery, or a negative test that is less than 48 hours old.

But the Swiss guardsmen have much closer contact with the pontiff every day. That is the reason why stricter rules apply to them, according to the Vatican.

After an intestinal operation and an operation on the lungs, the now 84-year-old head of the Catholic Church is breathing heavily – and he doesn’t like wearing a mask.

At the same time, the Pope is a strong proponent of vaccinations and got himself double vaccinated early in the year. In a video posted on August 18, he said accepting the vaccine was “an act of love.” On the return flight from Slovakia, he expressed his amazement at those who did not want to be vaccinated: “When we were children, we were all vaccinated against measles or polio, and no one said anything.”

Share. Twitter Facebook Telegram WhatsApp Email
Previous ArticleResearchers found Mount Sinai where Moses received the 10 Commandments
Next Article Several dead in an explosion in front of a mosque in Kabul