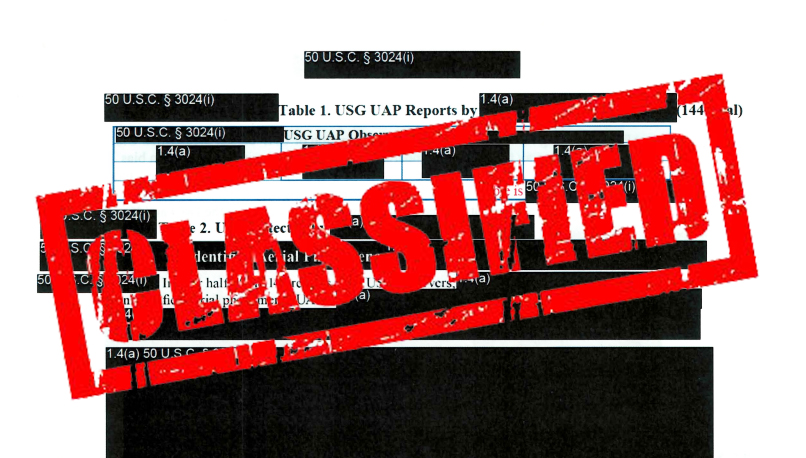 The U.S. Ministry of Defense published its UFO report in June 2021. Now it turns out that it was incomplete.

Do extraterrestrial UFOs really exist? This question should have been clarified with the US Department of Defense’s UFO report. The document published in June 2021, on the other hand, was anything but satisfactory for many. In large part, phenomena that were already known were revealed in the short nine-page report.

However, this was apparently an abridged version of the report, which was meant for public publication. There is said to have been a secret briefing between members of Congress that removed information from the public record.

The Freedom of Information Act (FOIA) is a law on freedom of information, i.e. to get public access to documents of state authorities. The website “The Black Vault” makes use of this right by publishing documents on “UFO” sightings. The website published an unabridged version of the UFO report on March 23, 2022. However, some passages have been blacked out.

It should be noted that the military does not speak of unidentified flying objects (UFO) in the report, but of unidentified aerial phenomena (UAP). The originally published report consists of nine pages. The report focused on sightings from 2004 to 2021. In addition, the agency looked for natural explanations for the unidentifiable objects, not for extraterrestrial origin.

According to the report, some sightings were birds, balloons, but also plastic bags. Natural atmospheric phenomena such as ice crystals, moisture, and thermal fluctuations were also concluded. The threat of foreign unknown technologies also counts towards some UAP sightings.

Dangerous abnormalities could initially be ruled out. However, it was noted in the public report that more time is needed for accurate analysis and to create a unified system for tracking sightings.

The Black Vault, on the other hand, has received a 17-page report in which some pages have been almost completely blacked out. Within these redacted passages images and charts are listed by the Department of Defense as common and less common (or irregular) forms of UFO sightings. These sections are entirely absent from the public report.

The more extensive report also shows that the FBI has investigated and is continuing to investigate the causes of the phenomena.

Maybe there will be an unedited version at some point?