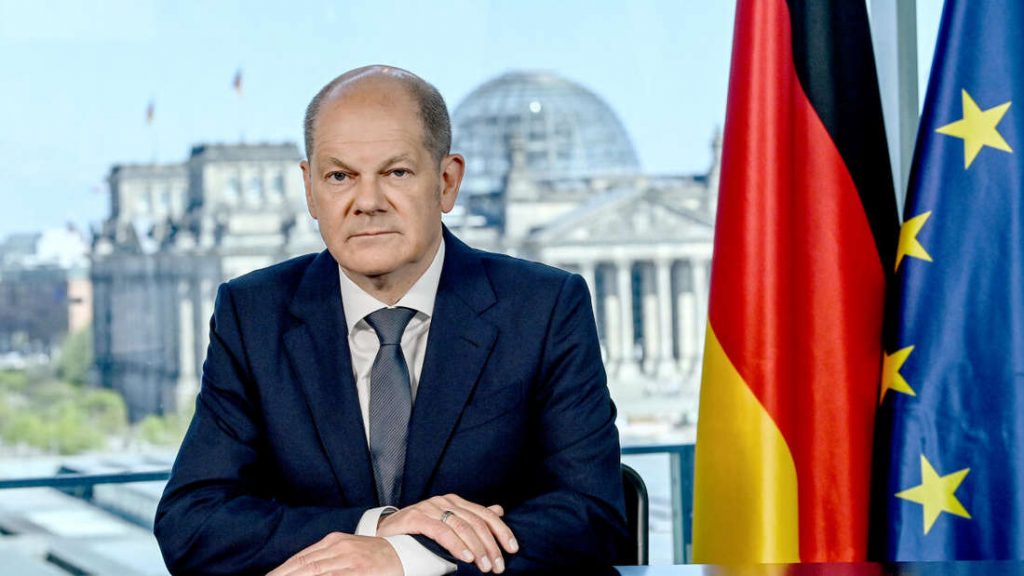 Chancellor Olaf Scholz addressed the nation on TV in the evening. In his speech, he emphasized the historical legacy of May 8 and explained Germany’s decision to supply heavy weapons to Ukraine.

“Putin will not win the war.”

The following full text of the speech is auto-translated from German to English.

77 years ago today, the Second World War ended in Europe. The silence of the guns on May 8, 1945, was like a graveyard quiet – over the graves of more than 60 million women, men, and children. Millions of them fell on the battlefields. Millions have been murdered in their towns and villages, in concentration or extermination camps. Germans committed this crime against humanity.

It is all the more painful to experience how today, 77 years after the end of the Second World War, brute force is once again breaking the law in the middle of Europe. How Russia’s army kills men, women, and children in Ukraine, reduces cities to rubble, and even attacks those who are fleeing. For me, this is a May 8th like no other. That’s why I’m turning to you today.

“Putin wants to subdue Ukraine and destroy its culture”

We cannot commemorate the end of the Second World War in Europe without facing the fact: that there is war again in Europe. Russia unleashed this war. Russians and Ukrainians once fought together, making great sacrifices, to defeat Germany’s murderous National Socialism. At that time, Germany was guilty of both nations, the Russian and the Ukrainian. We have been striving for reconciliation with both of them for decades. Now, however, Russia’s President Putin wants to subdue Ukraine, destroying its culture and identity.

President Putin even equates his barbaric war of aggression with the fight against National Socialism. This is historically falsified and infamous. It is our duty to state this clearly. But it’s not done with that. It was the Allied military victory that put an end to the Nazi dictatorship in Germany. We Germans are grateful for that to this day! In 1985, the Federal President at the time, Richard von Weizsäcker, was, therefore, able to speak of May 8 as the “Day of Liberation”.

“Not supporting Ukraine would mean capitulating to sheer violence”

We learned a key lesson from our country’s catastrophic history between 1933 and 1945. It reads: “Never again!” Never again war. Never again genocide. Never again tyranny. And yet it happened again – war in Europe. This was pointed out by Ukrainian President Zelenskyy today. In the current situation, this can only mean: We defend justice and freedom – on the side of the attacked. We support Ukraine in the fight against the aggressor.

Not doing so would mean capitulating to sheer violence – and empowering the aggressor. We help so that the violence can come to an end. That is why we have made far-reaching and difficult decisions in the past few days and weeks – quickly and decisively, well thought out, and weighed up.

We have imposed unprecedented sanctions on Russia’s economy and leadership in an attempt to dissuade Putin from his war drive. We welcomed hundreds of thousands of Ukrainians with open arms. Hundreds of thousands find refuge from the violence in their homeland with us. Aid organizations provide initial support, schools and day-care centers set up welcome classes, and citizens take refugees into their homes.

Thank you from the bottom of my heart for this enormous willingness to help everywhere in our country! And – for the first time in the history of the Federal Republic of Germany we have sent weapons to such a war zone, on a large scale – and always carefully weighing up heavy equipment. We’ll continue.

I can well imagine how much these decisions affect many of you. After all, it’s literally about war and peace. For our historical responsibility. For maximum solidarity with the attacked Ukraine. For the security of our country and our alliance. Reconciling these goals – is the task we face every day. The fact that we as a country are intensively discussing issues of such scope is good and legitimate. Democracy also includes conducting such controversies with “respect and mutual respect”. The Federal President rightly pointed this out in his speech this morning.

“Fear must not paralyze us.”

There is a serious concern in many of the statements I have heard these days. Also be careful that the war will spread, that peace could also be endangered here. It would be wrong to just dismiss that. Such concerns need to be voiced. At the same time, fear must not paralyze us.

I told you what we are doing to defend justice and freedom in Ukraine and across Europe. This is very much. And at the same time, we don’t just do everything that one or the other demands. Because: I swore in my oath of office to avert harm from the German people. This includes protecting our country and our allies from danger. Four clear principles follow from this for politics:

First: No German solo efforts! Whatever we do, we coordinate closely with our allies – in Europe and across the Atlantic. Second: In everything we do, we take care to maintain our own defensive capability! And: We have decided to equip the Bundeswehr much better so that they can continue to defend us in the future. Third, we are not doing anything that harms us and our partners more than Russia. And fourth: We will not make any decision that will turn NATO into a war party. It stays that way!

That there should be no more world wars – certainly not between nuclear powers – is also a lesson of May 8th.

Dear fellow citizens, I cannot yet tell you when and how Russia’s cruel war against Ukraine will end. But one thing is clear: there should not be a Russian dictated peace. The Ukrainians will not accept that – and neither will we. Rarely have we stood with our friends and partners as closed and united as we do today. I am deeply convinced: Putin will not win the war. Ukraine will survive. Freedom and security will triumph – just as freedom and security triumphed over bondage, violence, and dictatorship 77 years ago. Contribute to this as best you can, today that means “never again”! Therein lies the legacy of May 8th.”