MI6 is flying the transgender flag at their London HQ

MI6 flies the transgender flag at its HQ for the first time as agency boss ‘C’ says trans and non-binary spies have made the secret service stronger.

MI6 flies the transgender flag for the first time as boss says trans and non-binary spies have made service stronger trib.al/3LxO4IA

I keep saying transgenderism is incredibly important to the Elites that push globalism - it’s a cornerstone of their LUCIFERIAN beliefs. And they are mostly Luciferians, or Satanists as we call them here. They believe in duality and in inversion. Transgenderism is a reflection of both. People need to take this seriously. There are many people in public life - entertainment, politics, media, etc - who are closeted transgenders. Many have been transitioned from childhood or even infancy.

Check out Transpocalypse Now which is still archived on some channels on YouTube or maybe other sites - he’s also known as Mr E. Don’t always agree with him, but he’s opened MANY eyes.

Transgenderism is not a joke or a fad - it’s something they’re pushing very seriously.

funny the union jack is down,and the gay f ag is floating in the wind.
Sia can you please take a photo yourself cause for some reasons english tabloids are not a sure source of actual events…

My bad its for real…lol 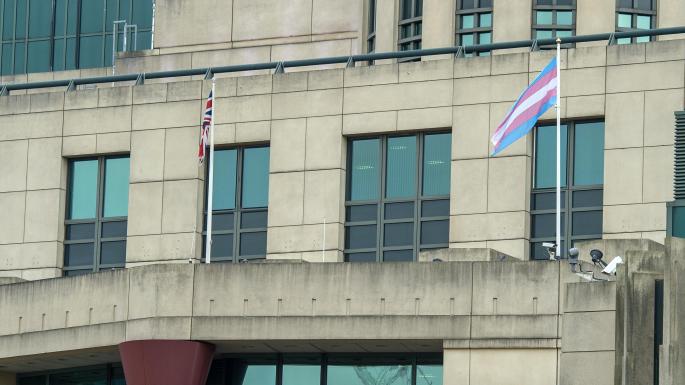 The head of MI6 has hoisted the transgender flag for the first time to show his support for LGBT spies.Richard Moore, who took over as “C” at the intelligence service in October, flew the banner from

it’s a cornerstone of their LUCIFERIAN beliefs.

This i think is very very true,
its the baphomet trans human belief paradigm its ancient and it is what the ruling class want to do to humanity,
no more males or females they will acheive this via altering biology perception and physical.
Its a personal affront to Gods natural creation and law of life.
These rulers hate God and all God stands for, also they are doing everyhting they can to degrade Gods favourite creation namely us.

Here’s the thing in order for anyone to go to work for any intelligence service you have to fit a very specific psychological profile. You have to hate people, you have to be a cry bully and a criminal, you have to be passive aggressive and a back stabber, you have to be one to kick people when they are down, you have to have exhibited toxic personality traits. Naturally toxic alpha males, high school bullies and the LGBTQ community are perfect for the job.

Don’t forget the intelligence community created the LGBTQ phenomenon. They created a new victim class they are now weaponizing against their enemies. The powers that be have shame, turning you and your children into mindless sex crazed useful idiots is no problem for these folks, take a look around they did it successfully to a large segment of the population.

If your trying to piss of people who value tradition and culture, can you think of a better way to do it?

Let me put it plainly, all you LGBTQ folks you are intelligence assets and mind control victims. You might not realize it now, you will at some point that is inevitable. Obviously you won’t be able to deal with it mentally and will take out on the innocent, and that is desired we see it in plain sight all around us today. Just rest assured you would not be who you are without the watchful guidance of the intelligence community.

I can just imagine all those Spies stalking each other in the Lingerie department in Selfridges…The all seeing eye’s peering through pairs of crutchless knickers.

Check out the video game called “the last of us part 2” omg’ I had to snap the disk & throw it in the trash! Its got trans/gay/moon landing, lesbians with baby etc it goes all out! even the majority of their reddit hate it…

I could not have spoken as much any better i assure you Cips brother,
unfortunately any critique at all from us normies is immediately and deceptively slanted into hate speech and transphobic and in this way any truthful criticisms are weaponised against anyone brave enough to merely tell observational common sense truth like us for example,
so expect the usual your against progress your a hater your transphobic to be levelled at us
at any given time now hehe.

I wear it as a badge of honour these days because it means we have hit a truthful raw nerve usually.
Analaysing the what, who, how, & why is not transphobic at all,
nor is disecting who created this phenomena either.
It is a great truthful saying that “you know your over the target when the flack starts flying”, its easy to see whose been mind controlled or who has not broken free when the criticisms come in…

Unfortunately like everyhting satanic its all backwards and reversed, as is the psychology too, so we become rto them what they really are and thats anti human progress because its a reproductive dead end that suits the ptb agendas perfectly and also its medically unclean this is just fact not malice aforethought simple facts of this phenomena, as both aspects are dangerous to humanities survival long term in obvious ways.

This danger is pre meditated by the satanic elites, they are superbly cunning when it comes to psychology thats for certain.
Take care brother im with you 100% always my good friend.

Giddday brother i have played the last of us game 1 and it wasnt really full on trans mind control of course it had mind control in it as usual with femisation and other things these games always do,
but i believe you when you say that the sequal is woke enough to make any sane person sickened by it.
I dont think i will bother buying or playing it now either, i dont support woke transagender pushing ideological subversion of humanity, theres only like .04% of the gen pop is trans so why such an over representation in public unless its being openly encouraged and even pushed into kids minds as normal and healthy when it plainly isnt for reasons i have already outlined like health risks teenage suicide rates and mental health risks etc,
its a dangerous psychological weapon used against kids and the masses this is certain.

The modern representation of Baphomet originated in 1861 with the French occultist Eliphas Levi, who drew an image of the “Sabbatic Goat or Baphomet of Mendes” in his book Dogme et Rituel de la Haute Magie (Dogmas and Rituals of High Magic). Levi’s image is a hermaphroditic figure, sitting cross-legged, with the head of a goat. The figure contains several opposites: one male arm and one female, women’s breasts but a Caduceus phallic symbol, one arm pointed up at a white moon and the other pointed down at a dark moon. The contrasts were to symbolize conflicting forces in the universe that must be balanced to make true light.<~~~~~~[bs]

Just another name for the false god and fallen angel Lucifer with many other names! See the Names of Satan along with Satan’s Origin and Doctrine From Got Questions - Baphomet is the name of a false god associated in times past with the Knights...

This post was flagged by the community and is temporarily hidden.

You mean all the babies that your side hasn’t dismembered in the womb yet?

Where you see a female politician

It’s a fookin game , it’s not real , are you insane or something ? If you snapped the disc I strongly recommend you take a hammer to you television for showing those ungodly images and polluting your brain , you must repent. …

Even in games tho, it can “implement” a seeded idea.

Same with music,movies,shows,and eh…and if you’re f**kin dumb enough then the MSM news

Republicans and their stupid causes.

Such homophobes which makes me think you guys are secretly gay and hate on the stuff that turns you on because you think it is the LGBTQ community who are luring you to the dark side.

Sorry, nuts and corn sticking on my dong tip after being in a man’s hairy pimple ridden ass isn’t really “sexy” and “inviting” to me. And it’s not that I’m afraid, “phobe” means “fear”…there’s a pretty BOLD LINE between fear and being totally disgusted and turned off.

Being “grossed out” isn’t “being fearful”.

It’s not hate either,just not my cup of tea and I think it’s FACIST of someone to FORCE their emotions and feelings about HOW I SHOULD SEE IT.

Maybe the emoji can get it across better…

But by all means, enjoy your salad.

Lol quite funny to be fair

They just openly declared war on the citizens lol

they are working for subversion

Or raped, sniffed, sold into sex slavery, child trafficked or sold for organs.

A seeded idea ? I watched tom and jerry all my life but have never thought about taking a hammer to a cat , it’s only week minded fools who are seeded by things.

Honey you are seeded so heavily you need aeration. You are the quintessential “seeded” programmed ignorant American establishment parroting lefty. You don’t engage in debate, it’s a shouting match of msm talking points with an ignoramus who neither has the logic nor knowledge base to engage in a meaningful exchange.

Yet again you are oversimplifying the topic at hand and going to extremes. The purpose of Tom and Jerry was never to have you hammering cats, the purpose was to set the tone for an empathetically challenged, kill or be killed, survival of the fittest, “capitalist” society. The purpose was to desensitize the target audience to violence and the suffering of others. Psychological programming is a fine art, a micro surgery if you will, a little nudge nudge here a little nudge nudge there. Expecting a MSM establishment shill to understand how or society is packed with genius levels of psychological programming is an exercise in futility. That’s like asking Cheesin’ Biden to put down the pipe. Simply put you are scared to open your eyes, furthermore your ego does not allow for fallibility, it’s a toxic personality trait very common in our society also very useful to TPTB.

The topic at hand is video games one of the most insidious forms of psychological programming. The gaming industry works very closely with the deep state molding the minds of young impressionable players. We saw the introduction of LGBTQ characters and themes creeping into video games much like we did in film and television in the mid 2010s.

“The last of US” is a game I will not play. The name itself speaks volumes yet most gamers are too stoopid to see what’s in front of them.

GameStop Ma’am was no kawinkydink!