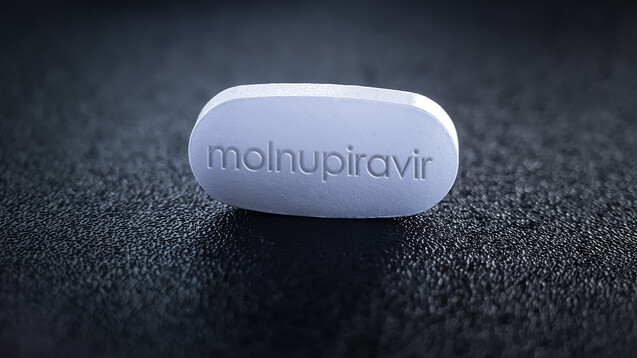 Molnupiravir pill of experimental drug that stops viruses like the coronavirus from making copies.

Merck (NYSE: MRK) today announced that the United Kingdom Medicines and Healthcare products Regulatory Agency (MHRA) has granted authorization in the United Kingdom (U.K.) for molnupiravir, the first oral antiviral medicine authorized for the treatment of mild-to-moderate COVID-19 in adults with a positive SARS-CoV-2 diagnostic test and who have at least one risk factor for developing severe illness.

“Today is a historic day for our country, as the UK is now the first country in the world to approve an antiviral that can be taken at home for COVID-19. This will be a gamechanger for the most vulnerable and the immunosuppressed, who will soon be able to receive the ground-breaking treatment.”

Merck announced its application with the U.S. Food and Drug Administration (FDA) for Emergency Use Authorization (EUA) of molnupiravir is under review and recently announced the European Medicines Agency has initiated a rolling review of the company’s Marketing Authorization Application. Merck is actively working to submit applications to other regulatory agencies around the world.

“The first global authorization of molnupiravir is a major achievement in Merck’s singular legacy of bringing forward breakthrough medicines and vaccines to address the world’s greatest health challenges. In pursuit of Merck’s unwavering mission to save and improve lives, we will continue to move with both rigor and urgency to bring molnupiravir to patients around the world as quickly as possible.”

The authorization is based on positive results from a planned interim analysis from the Phase 3 MOVe-OUT clinical trial, which evaluated molnupiravir 800 mg twice-daily in non-hospitalized, unvaccinated adult patients with laboratory-confirmed mild-to-moderate COVID-19, symptom onset within five days of study randomization and at least one risk factor associated with poor disease outcomes (e.g., heart disease, diabetes).