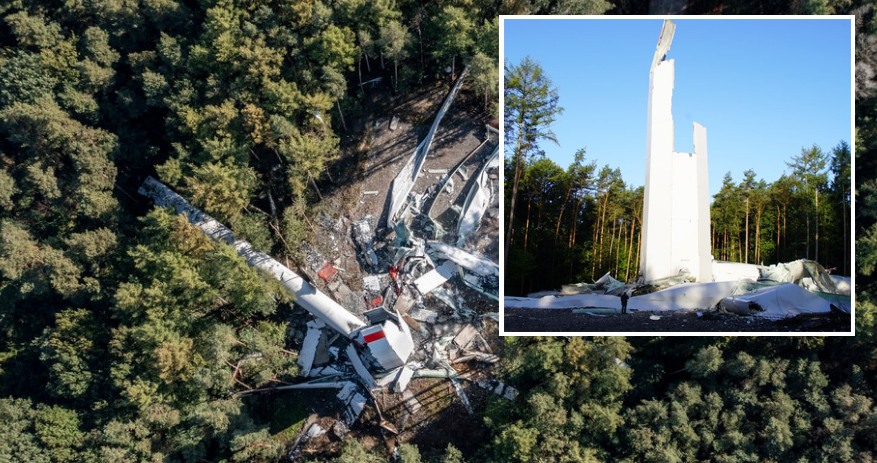 A freshly installed and almost 240-meter high wind turbine collapsed in a forest near Haltern in Germany. The damage amounts to several million euros.

The site of the debris field is cordoned off within a radius of several hundred meters.

The police do not assume a crime was involved in the collapse. Today experts, commissioned by the manufacturer Nordex, will start looking for the cause of the collapse.

The cracking noises from the collapse of the wind turbine could be heard for miles on Wednesday evening. Huge pieces of debris are scattered everywhere on the base of the system, which was only a few months old.

Wind turbine broken off at a height of 20 meters

But nobody was injured. The fire brigade searched the forest with a thermal imaging camera, and a police helicopter. They wanted to rule out the possibility of strollers being hit by debris.

Haltern Mayor Andreas Stegemann was horrified during a visit to the site of the accident that such an accident is even possible. The wind turbine from the manufacturer Nordex was operated by Stadtwerke Haltern and a subsidiary of Ruhrkohle AG. They put the damage at around six million euros.

According to Nordex, there are almost two dozen identical turbines in Germany or are still under construction. As a preventive measure, all 23 systems nationwide with the same configuration have been temporarily put out of operation at short notice, according to Nordex.

It’s not the first wind turbine that failed or collapsed: